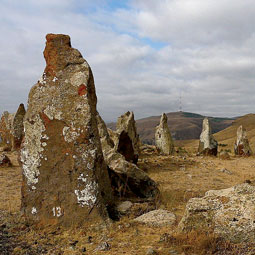 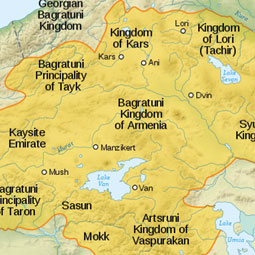 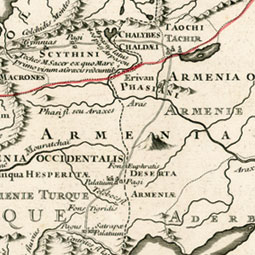 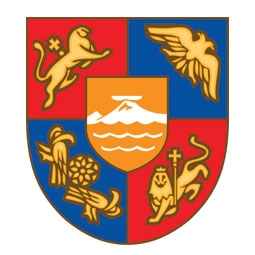 The oldest Armenian coins were found belonging to Ionian city of Miletus. King Oront (or Yervant) began striking coins in Spohene (Tsopk) which are on record the earliest Armenian coins. These Hellenistic style coins show the image of the ruler on the front and various mythological scenes on the back.

Ancient Armenian coins were ascribed to Tigran I and Tigran II of the Artaxiad dynasty. On the obverse they depict the king’s profile with Armenian tiara featuring the 8-pointed star and two eagles looking at each other. The reverse showed mythological scenes as well as names and titles (‘King Tigran’ or ‘King of Kings Tigran’) of the kings in Greek.

At the end of the 11th century the Armenian kingdom of Cilicia was established, which lasted a little more than three hundred years (1080 – 1375). Silver, copper and sometimes billon Armenia coins were minted during the kingdom era beginning with King Levon I. The silver coins were called Armenian dram or takvorin while the copper coins were named dang, kardez, or pogh. From the 16th century until 1820s, coins of Iranian Shahs dominated. There were copper, silver and gold coins minted in many Iranian towns and Yerevan.

Following Armenia’s independence in 1991, the Armenian dram was divided into 100 lumas. The first Armenian dram coins were introduced in 1994 in denominations of 10 luma, 20 luma, and 50 luma, and 1, 3, 5, and 10 dram. All of the coins are minted from aluminium alloy, and feature the value and year of minting on the obverse, with the Armenian coat of arms on the reverse. New Armenian coins were released in 2003 and 2004 in denominations of 10, 20, 50, 100, 200, and 500 dram. The new release features Armenian coins minted from a variety of metals, giving each coin a unique colour.

Your search for the best Armenian coins ends here only on Mintage World.