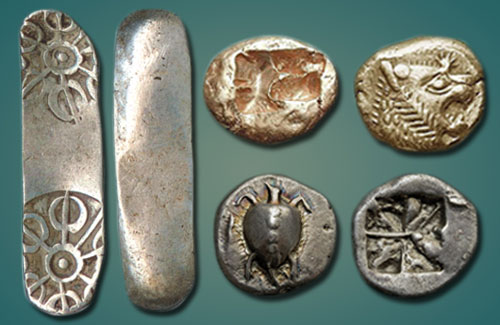 Young Numismatist: Time to Show You The Money

You always cribbed “Show Me the Money”. Now you get to see me in person, nice, up and close!

Who said I can’t buy you happiness? What if you were given 100 million dollars?

There you go, I know you are smiling; stop dreaming, because you can’t just own me, you need to earn me!

The term coin comes from the Latin word "cuneus" and from Old French coigne meaning a wedge. The die for stamping metal was wedge-shaped. In English, the term signified a die for stamping money, or a piece of money produced by such a die. Coins are objects made up of metals and have marks that are assigned by the governing authority. A coin has two sides the front side is known as obverse and the back side is known as Reverse. The earliest coins are mostly associated with Iron Age Anatolia, especially with the kingdom of Lydia (Presently in Turkey). The usage of coins became more and more popular during the 6th and 5th centuries BCE, throughout Greece and Persia, and further to the Balkans.

Early coins were not standardized in weight or shape and in their earliest stage may have been ritual objects, such as badges or medals, issued by priests. They had images that were inspired by elements of nature like the sun, various animal motifs, trees, hills etc. and some were geometrical symbols. The later periods saw images of kings, queens, Gods and Goddesses in various forms on coins.

Ever wondered how and where I came into existence? Let’s find out!

My name was mentioned in the ancient Vedic texts through terms like nishka, nishka-griva and hiranya-pinda, suvarna, shatamana and pada (gold globules).

But it’s just like a lawyer fighting his case without substantiation.

One can only argue about this fact, since the mention of these terms might suggest wealth in general but it doesn’t necessarily mean that they were actually talking about me.

Unlike the present day, human beings were mostly content with what they had. They never constantly kept looking around for the best deals on the internet or keep striking off items from an endless wish-list.

Back in those pre-historic days, all that human beings needed for survival was food and shelter. Slowly, their increasing wants left them unsatisfied with what they already had. Barter system was introduced using which one type of goods was exchanged for another one.

For example, a handful of rice might have been exchanged for 2 or 3 fruits.

Now, who is to decide the fairness of this scheme? What if someone asked for a handful of rice for 2 or 3 peanuts?

Barter system is also mentioned in Rig veda, Yajurveda and by Panini and Patanjali in their various works. The sign of wealth or the medium of exchange were cows, cattle or other non-metallic objects.

Barter continued from Stone Age till the Harappan times.

At one point in history, shells and beads were used as a medium of exchange. Broken and whole cowry shells were used. Whole shells, naturally, held a higher value than broken ones. Cowries, soon, came to be equated with money. You may have heard the Hindi phrase "Phoote Cowrie" which refers to broken cowry shells as the smallest denomination.

Numerous Indus seals have been discovered in Sumeria and Western Asia which were possibly used as a medium of exchange during the first civilization - The Indus Valley Civilization. Although the script on these seals has not yet been deciphered and we cannot be assured of the fact if they can be termed as coins.

But the problem of standardization might have made humans think of a new way of exchanging goods during the second civilization - Mahajanapadas.

Heavy intra and inter janapada trade from 600 BC to 300 BC prompted the need of a new medium of exchange.

There are many references of coins being in use by Manu, Panini, and also in the Buddhist Jataka stores.

One of a bas-relief at the Bharhut stupa illustrates a very famous Jataka story.

When Buddha accepted Anāthapindika's invitation to visit Savatthi, Anathapindika started to search for a suitable place for Buddha’s residence. He offered to buy a Jetavana grove belonging to a Prince Jeta who refused to sell saying: "Not even if you could cover the whole place with money." According to a courts order, Anathpindika purchased the grove (park) by covering Jetavana with pieces of gold coins laid side by side.

Archaeological discoveries of coins and artifacts around this time confirm the earliest form of coinage in the Indian subcontinent. Kahapana/karshapana, nikka/nishka, shatamana, pada, vimshatika, trinshatika and suvanna/suvarna have been mentioned in Buddhist texts and Panini’s Ashtadhyayi which further strengthens the evidence of this fact.

So, it’s time to give it up for my earliest ancestor .... Punch-marked coins!

Probably they made me in a cast (show uninscribed copper cast coin) or a single punch marked round shaped coin in silver (show coin of gandhar janapada ? with single punch or a bent bar with two punches on both the end of a bar)

They were cut out of metal sheets or made out of flattened metal globules on which dies or punches were then used to hammer on the symbols.

Some of these may have had a religious and political significance.

Legends are important aspects of modern-day coinage, but my earliest ancestors didn’t feature them.

The absolute weight of the metal defined their value.

Today, the basic unit of measurement is grams, but ever wondered how a gram equals one gram?

They racked their brains and found a novel idea of using beans and seeds as units of measurement. Yes you’ve heard it right, seeds and beans!

A black and red seed of the gunja berry (Abrus precatorius) known as the raktika, ratti or rati was the basic unit of Indian coin weight systems. Silver punch-marked coins generally weighed 32 rattis or about 56 grains (grain is a weight measure used for metals; 1 grain=64.79 mg, 1 gram = 15.43 grains). Similarly, in South India, the standard weight of coins was calculated on the basis of the relationship between two kinds of beans- the manjadi (Odenathera pavonina) and the kalanju (Caesalpinia bonduc).

The first coins in India, and consequently all over the world, were minted c. 6th century BCE.

Punch-marked coins circulated all over the subcontinent and are found at many places till the early centuries CE but they continued to be in circulation for a longer period in peninsular India.

Now that you know the origin of coinage you would have realised that my forefathers have a historic tale behind them.