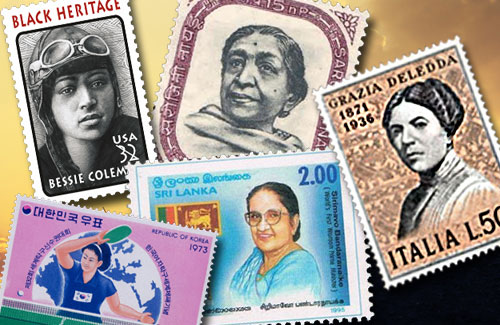 Celebrating Womanhood on Stamps of the World

As International Women’s week is almost here, let’s take a look at some stamps from across the world which portray different roles that women have played in the society. Apart from roles like that of a mother, a life partner, a sister, a friend and many more, they have proved their talent and skills in various fields.

Undoubtedly one of the greatest woman social workers, also known as Blessed Teresa of Calcutta, Mother Teresa was born in Macedonia where she lived for 18 years, then moved to Ireland and then to India. After adopting Indian citizenship, she spent a few months in Patna to receive a basic medical training in the Holy Family Hospital and then started working for the underprivileged living in slums. She started a school in Motijhil (Calcutta) and then started tending to the needs of the destitute and starving, helping the "poorest among the poor". In 1979, Mother Teresa was awarded the Nobel Peace Prize, "for work undertaken in the struggle to overcome poverty and distress, which also constitutes a threat to peace." An Indian stamp worth Rs.45 features this mighty-hearted woman.

Be it science, technology, astronomy or aviation, women have spread their wings and have been successful in their respective professions. Elizabeth "Bessie" Coleman was an American civil aviator and was the first female pilot of African American descent and is also the first Native American woman to hold a pilot license. She was a brilliant student and belonged to a poor family. After several hardships she enrolled in the Oklahoma Colored Agricultural and Normal and completed the course before returning home. At the age of 23 she moved to Chicago where she worked at a barber shop as a manicurist. She developed her interest in flying after heard stories from pilots returning home from World War I. American flight schools did not admit black women. Robert S. Abbott, founder of Chicago Defender, encouraged her to study abroad and Coleman received financial backing to do the same. In Paris, She learned to fly in a Nieuport Type 82 biplane. On June 15, 1921, Coleman became the first woman of African American and Native American descent to earn an aviation pilot's license, and the first person of African American and Native American descent to earn an international aviation license. In 1921, she sailed for New York where she became a media sensation.

There are many celebrated women writers and artists in the world who have shown a whole new perspective to looking at things through their masterful works. Grazia Deledda was an Italian writer and also the first woman who received the Nobel Prize for Literature in 1926 "for her idealistically inspired writings which with plastic clarity picture the life on her native island and with depth and sympathy deal with human problems in general". She started writing at a very tender age and her writings were inspired by the Sardinian peasants and their struggles. The first novel she wrote was Fiori di Sardegna in 1892.

Women today are playing a vital role in contributing to the economy of a nation and there are several businesswomen who have made their mark as extremely successful entrepreneurs. Carla Zampatti is one such lady who is a world-renowned Australian designer and the Executive Chairman of Carla Zampatti Pty Ltd. She is board member of various prestigious business ventures as well. Carla opened her first boutique in 1972 in Surry Hills, Sydney Australia. Over the next 3 years she opened stores in Mosman, Double Bay and Elizabeth Street Sydney, growing the Carla Zampatti Pty Ltd company to create a chain of 30 Carla Zampatti boutiques and concept stores across Australia.

Woman activists have been a part of several uprisings and have been the driving force behind the independence of their respective nations. Sarojini Naidu also known as The Nightingale of India, was an Indian independence activist and poet. Naidu served as the first governor of the United Provinces of Agra and Oudh from 1947 to 1949; the first woman to become the governor of an Indian state. She was the second woman to become the president of the Indian National Congress in 1925 and the first Indian woman to do so. Naidu joined the Indian national movement during the partition of Bengal in 1905. From 1915?1918, she travelled to different regions in India delivering lectures on social welfare, women's empowerment and nationalism. In 1917, she also helped to establish the Women's Indian Association (WIA). She was sent to London along with Annie Besant, President of WIA, to present the case for the women's vote to the Joint Select Committee.

There are many women entertainers who have rocked the audience with their thrilling performances, be it acting, singing or dancing. The first recognized star of Soviet cinema, Lyubov Petrovna Orlova was a famous theatre actress and a gifted singer. Born to a family of Russian nobles in Zvenigorod, Orlova studied in Moscow Conservatory but did not graduate because she had to work to support her parents. Even after her first husband, a Soviet economist Andrei Berezin, was arrested in 1930, she continued with her splendid performances and had a successful career. Orlova's performance in a very popular 1934 comedy, Jolly Fellows was appreciated by Stalin and she earned the title "Honorable actor of the RSFSR".

History has proved that some of the most powerful administrators or politicians have been women. Sirimavo Bandaranaike was a Sri Lankan stateswoman and politician and the modern world's first female head of government. She served as Prime Minister of Ceylon and Sri Lanka three times, 1960?65, 1970?77 and 1994?2000, and was a long-time leader of the Sri Lanka Freedom Party. Known to her fellow Sri Lankans as "Mrs. B," she could skilfully use popular emotion to boost her support, frequently bursting into tears as she pledged to continue her assassinated husband's policies. Her opponents and critics called her the "weeping widow", saying she got herself nominated a Senator and made head of her husband's party after his death by making capital out of his death, going around to different villages and weeping over their children. Bandaranaike was a socialist who continued her husband's policies of nationalizing key sectors of the economy, such as banking and insurance, and also nationalizing all schools then owned by the Roman Catholic Church in 1961.

Sportswomen from all over the world have displayed their strength, skills and agility, time and again from a very long time. The Republic of Korea won the women’s team event in the 32nd World Table Tennis Championships held in Sarajevo, Yugoslavia in April 1973. Korea became the world champions for the first time and won all eight contests beating top-ranking Chinese and Japanese teams. Competing against 49 world teams, the Korean Women’s team emerged as a dominant force in the world’s ping pong arena. A special commemorative stamp has been issued featuring a ROK team player going for a smashing attack on her opponent.

“WE CAN DO IT” stamp

The spirit of womanhood can never fade away. Women today have the power to change the world. "We Can Do It!" is an American wartime propaganda poster produced by J. Howard Miller in 1943 for Westinghouse Electric as an inspirational image to boost worker morale. It was used to promote feminism and other political issues beginning in the 1980s. It also featured on the cover of Smithsonian magazine in 1994 and on a US first-class mail stamp in 1999. The poster is one of the ten most-requested images at the National Archives and Records Administration.

Yes You Can Do It, and nothing should stop you! Happy International Women’s Week.