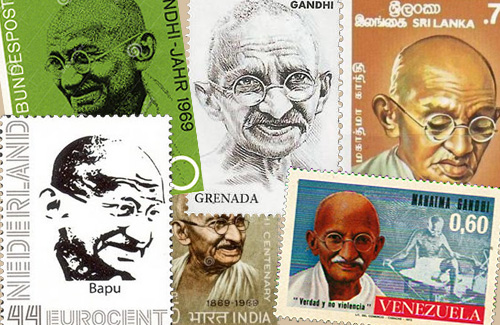 Father of the Nation on Stamps of the World

More than 300 postage stamps on Gandhiji have been released by many other nations in this world!

Mohandas Karamchand Gandhi, popularly known as Mahatma Gandhi or Bapu a renowned political figure in India has become the object of worship and inspiration not only for the Indians but for the world all over. The stamps issued in his memory are solid proof of the respect he is given by the whole world.

Besides, first postcard released on Gandhi was Poland and first envelop was released by Romania.

UN issued stamp of $1 in 2009 to celebrate International Day of Non-Violence. The most peculiar of a stamp comes from Kazakhstan where in the portrait of Gandhiji is seen on a red background along with a church, mosque and a temple.

Teachings of Mahatma Gandhi spread all over world inspiring many political leaders who successfully followed the path shown by him. Martin Luther King was awarded the title of the ?Gandhi of the West’. The stamp of Gibraltar carries a famous Gandhi quote "Hate the Sin, Love the Sinner”.

Ample amount of stamps featuring Bapuji were issued in India alone. Any major national event is commemorated with the issue of a stamp with his portrait.

These stamps are the proof of the respect which the entire world bestows on our ?Father’.