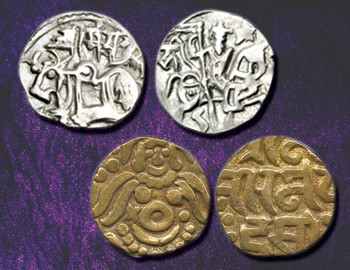 Coins are a form of legal tender first used c. 6th century BCE in India. The need arose for a stable mode of payment and coins have risen gloriously to the occasion. Previous methods of payment have been replaced over time. But what has enabled coins to be used for payment for over two millennia? The stability in the value of precious metals can only go so far. But when combined with the authentication done by governing authorities, coins become a stable and reliable form of money.

When we look back at Indian coinage, we see a vast variety in the devices and designs on them. And when placed in order, we can usually see continuity in the coin design. The changes are subtle with each successive ruler of a region or dynasty. They may be more pronounced in the coins issued by the first and last king of the same dynasty if they ruled for a long time. For instance, the changes in the design of coins issued by the first Mughal emperor, Babur, and the last, Bahadur Shah Zafar, perhaps shows the most striking differences.

The more variety in the coins issued by a ruler, the more importance we assign to them. Then why do we need numismatic continuity if we scan for the differences? The answer is fairly simple. Coins were never issued for collecting; they were issued for economic reasons. Coins were meant for transactions. If there were a drastic change in the design of the coins we use today, would we still blindly accept them? Or would we question them?

Coins are legal tender only when authorised by an official. This stood true even in the ancient and medieval times. The only way a common man could trust the authenticity of the money in circulation was by identifying the devices and designs on the coin. If these devices were to suddenly change, people would not accept the coin as legal tender and it would lose its value, thereby rendering the metal useless. For instance, the new one and two rupee coins issued are smaller than the previous ones. When they were first released, they caused quite some a lot of confusion in the population. I remember being sceptical about its authenticity till the shopkeeper insisted it was legitimate.

Another reason for numismatic continuity was to facilitate the ease of recognising the issuing authority. Coins of different regions bore varying designs and one look at them enabled people to recognise the issuing kingdom. Any changes in coinage would have to be introduced slowly and subtly to facilitate a smooth transition.

The Bull and Horseman coins were first issued by the Hindu Shāhi kings ruling the Gāndhāra or Kābul region during the second half of 9th century CE. Probably introduced by Spalapatideva, these silver and copper coins depicted a sitting bull on one side and a horse-rider holding a long lance on the other. The designs are variably executed on the coins and have been issued by all the Shāhi kings, most important of who is Sāmantadeva. The design has been adopted on the coins of rulers of different dynasties in India including the Tomāras, Sallakshaṇapāla, Anangapāla, Madanapāla Deva, the Chāhmānas of Śākambari, Someśwaradeva, and Prithvirāja.

Śri Pipala, a ruler belonging to an unknown dynasty, issued coins of this type with the legend ‘Kuṭamāṇa Sāmantadeva’ on the side with the bull. A few crude coins bear no inscription on the ‘Horseman’ side. Inscriptions found on the ‘Bull’ side include ‘Śri Mahipāladeva’, ‘Śri Astapāladeva’, and ‘Śri Amritpāla’. The former is attributed to the Tomāras. Last in the series are those issued by Malayavarman of the Pratihāras, Chāhaḍadeva, Āsalladeva, and Gaṇapati of the Jājapella dynasty which ruled Narwar. Their coins only depict one of the two motifs seen on the Shāhi coins. Somalekhā Devi, queen of the Śākambari ruler, Ajayadeva, also issued coins bearing the ‘Horseman’ motif on the obverse and her name on the reverse.

The Kalachurī ruler of Tripura, Gāṅgeyadeva, issued gold coins depicting a four-armed Goddess Lakshmi on one side and his name in Nagari on the other. The goddess sits cross-legged holding a lotus in the two upper hands. The legend on the reverse reads ‘Śrimadgāṅgeyadeva’ in three lines in Nāgarī characters. These coins were also issued in silver and copper but the shades vary as the metal purity degrades. The image of the goddess also degrades over time; going from a good drawing image to a crude one. Such degeneration occurs over a long period of time and Gāṅgeyadeva’s 25-year reign would not have been enough. It is, therefore, assumed that coins of this type were issued in Gāṅgeyadeva’s name for over a century after his death.

The Bull and Horseman and the Lakshmi type of coins were popular during the 11th and 12th centuries CE and were two main types of coins issued by a number of dynasties of the age. Both types were issued by Muhammad bin Sām and the Bull and Horseman continued to be issued by his successors in India. The obverse legend reads ‘Śri Mahamad Sām‘ while the reverse reads ‘Śri Hamīrā‘. The reverse of Sām’s Lakshmi type coins bears the legend ‘Śri Mahamad bin Sām‘. The coins went on to be used in a degenerated form by the Katoch rulers of Kangra.