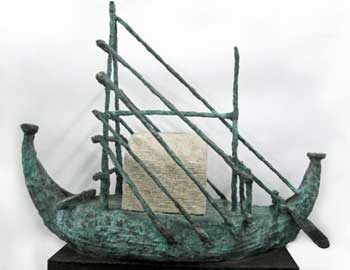 A long ago, around 3700 BCE the world’s one the earliest port was built in the city of Lothal (Gujarat, India) by the people of Indus Valley. And this was the beginning of the maritime history in the Indian subcontinent. So today, we will surf into the Indian maritime history through Indian numismatics; coins with ships and boats.

The boat fragments are found on the painted potsherd and an unfired steatite seal of a boat are excavated at Mohen-jo-daro. The Indus valley was called as Melluha and it was mentioned in Mesopotamian texts; both of the ancient civilization had trading contacts with each other. And of course, this would not have been possible without bustling and advance maritime trading activities. The researchers often opine that Indians knew the art of boating/ boat building since the Stone Age Period[1].

Let us the check the historical sources of boats in Archaeology and Literary.

Reference to ships and voyages in Literary sources

Do you know the word ‘navigation’ is derived from the Sanskrit word ‘Nav Gath’?

‘Boat’ in Indian Art and Architecture

India has a very rich art heritage but the depiction of ships and boats is very limited in comparison to other popular themes in Art and Architecture.

A number of rock paintings in rock-shelters, datable to the Mesolithic period, provide evidence of boats built and used by cavemen. Boats are depicted around c.200 BCE in the sculptural panels on the stupas of Bharhut, Sanchi, Amravati, and Kanheri.

The above literary and archaeological sources signify that India had knowledge of nautical science. Indians had a fair knowhow/working knowledge of boat building. This would also engage them in sea trades.

Ships and Boat in Indian Numismatics

‘Boat’ as a symbol in Indian Numismatics was seen for the first time on the silver Punch-Marked Coins (PMC) of Vanga Janapada.

The western part of West Bengal is identified as Vanga Janapada[3] of early historic India. Fig 1.1 shows the silver PMC of Vanga (c.200-100 BCE). It has a sun, boat, six armed symbols and an open cross depicted on it (Rajgor series 4. 30-32).  The ship mark is a significant symbol on the coins of the Vanga Janapada as these coins occur in the region of the Lower Ganga/ Brahmaputra where boat traffic would have been an efficient means of transport or trade. 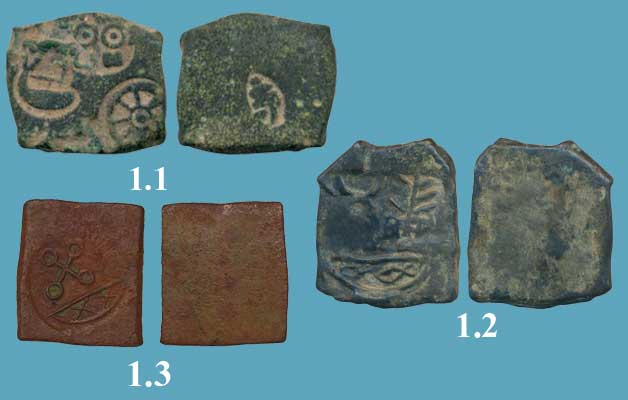 However, here we see that the boat symbol on the coins of Vanga Janapada, Kurapurika and Ujjain form a part of a set of multiple symbols. However, ship as a single/ independent symbol on coins was introduced for the first time in the history of Indian Numismatics by the Satavahanas!

Vasisthiputra Pulumavi and Gautamiputra Yajna Sri Satakarni issued coins depicting ships on them.  On the coins of Vasisthiputra Pulumavi, we observe a ship with masts. These ship motif coins have been found from the shores of Madras and Cuddalore. While on the coins of Gautamiputra Yajna Sri Satakarni we see, a ship with two masts and below the ship a fish and conch can be seen.

These coins provide some good representations of contemporary ships having one or two masts. They were seafaring trading vessels of large size and high tonnage. Being depicted on small coins, not many details can be made out. However, it is possible to discern certain characteristic of the boats used during that period. 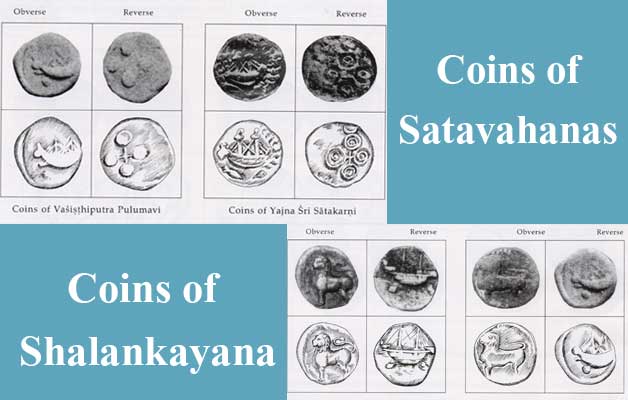 Shalankayana, a vassal power of Pallavas, was an ancient ruling dynasty in the region of Andra (300 CE to 440 CE). One of the coins of the Shalankayana depicts a lion on the obverse and ship with two masts on the reveres. The obverse lion is almost similar to that of the Satavahana ruler coins. The combination of a lion and a ship with two masts is seen for the first time in the coin series from the Indian subcontinent. Also, the adoption of a lion (standing for regal authority) and ship with two masks (Indicating the maritime activity) on the coins are supposed to be borrowed from the Satavahanas.

The sea power of the Shalankayana helped them to establish the overseas contacts and spread Buddhism to Myanmar and Thailand.

By the early 4th Century CE, the Pallavas became a dominant power in the south and established a strong naval power on the Coromandel Coast[5]. This can be also seen by their coin issued by Pallava rulers.  The initial coins of Pallava depicted a single mast ship and the later kings issued coins showing double masts.

The depiction of a ship on coins from a single mast to double masts not only shows the transformation in the shipbuilding technique but also the improved economic conditions with the sea trade. 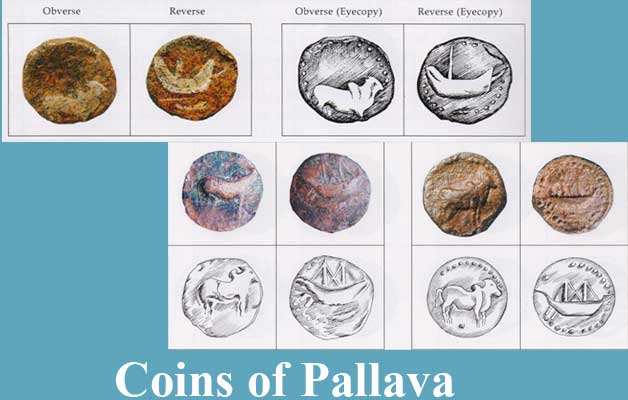 These coins throw light on contemporary ships with two masts which closely resemble those represented on the Satavahana coins. The stem and the stern of these ships are upturned and raked. At the stern end, a pair of steering oars is depicted. These representations of ships suggest that not many changes had occurred in the shipbuilding techniques over the centuries.

These coins are found as far as Khuan Luck Pot in Thailand signifying the trading contacts with Pallavas and their maritime trade contacts with these Southeastern countries.

In the medieval period, we don’t come across any boat or ship on coins. Maybe the ships were so common during that time that the rulers didn’t find it important to portray them on coins. However, we do see them in medieval art. A ship carving is seen on the Shiva temple of 1100 CE at Tirumangalam (Tamil Nadu), depicting upturned stern and stem with high waves. Some other representations of boats in art form are seen at Orissa, Puri, Bhubaneswar, Goa, Konark, Dilawara temples (Mount Abu, Rajasthan), Gujarat etc.

This was a sneak peek into India’s past maritime history. We see ships on modern coins also.

We saw the coins of Janapada, Kurapurika, Ujjain, Satavahana, Shalankyana, and Pallavas who established a naval power. However, there were many other dynasties and rulers who had a strong hold on navy but are not known to have depicted ships on for their coins. Chola and Marathas are few of them.

So when did the man come up with the thought of wanting to float over water? When did the idea of a raft, boat or a ship which could sail for miles came to be?

No one better than the ‘sea’ to comment on this! All the maritime activities have taken place on this calm looking sea. We wish that the sea could speak and tell the stories of Maritime! The boat may look very unnoticeable today but if we actually look at the history of the boats then it goes back to centuries and at that time the boat would be probably the best invention of the human.

After studying the above coins it won’t be wrong to say, ‘India has had a very rich maritime heritage since ancient time’.

View all posts by Team Mintage World →
2 thoughts on “Maritime surf through Indian Coins: Coins with ships and boats”