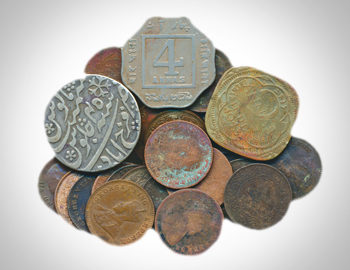 The world is a dangerous place for valuable coins. Hazards lurk in the air, in storage containers, and even on collector’s fingertips. Exposure to these hazards can subject a rare coin to irreparable damage that can greatly diminish its value. Fortunately, there are ways to guard against such risks and maintain these coins in their original and pristine condition using different coin cleaning methods. There are also ways of protecting coin investments by storing them properly. All these prudent steps can make the world a much safer place for rare coins.

“Cleaning” is a term with positive connotations, but in some cases, it can be extremely negative when applied to coins. Unknowledgeable individuals, in an effort to improve their coin’s appearance often end up causing devastating damage to their collectability and resale value. When performed by skilled professionals, however, certain types of cleaning can actually retard some destructive processes and enhance a coin’s appearance.

Some mild types of coin cleaning under some circumstances might improve a coin’s appearance while other types could destroy its premium value. All coin cleaning has to be done with care; coins are delicate and susceptible to damage if mishandled. It is advisable to leave coins cleaning of any kind to experts.

There are two types of coin cleaning: abrasive and nonabrasive

This is the most harmful type of coin cleaning. A coin’s grade is based primarily on how much wear it has if it’s a circulated coin and how well it has been preserved in its uncirculated state. Abrasive cleaning removes a part of coins and thus lowers the grade. Furthermore, abrasive cleaning activates metal’s oxidation process. Even if a coin is shining brightly one day, the next day it could turn black from having had its metal activated.

Abrasive cleaning removes the top layer of metal of a coin. Using this method is like subjecting a coin to circulation! From the friction or rubbing on the coin’s surface from cleaning, part of the coin’s design is worn away.

Any process is abrasive that requires an individual to use a wire brush to clean coins. Also, any process that involves treating coins with acid is abrasive. The same effect can be achieved chemically that a wire brush achieves. One should never clean any coins abrasively. Coins discovered at sea as part of an underwater exploration are sometimes cleaned abrasively so that they can be identified. This is the only acceptable numismatic use for abrasive coin cleaning. 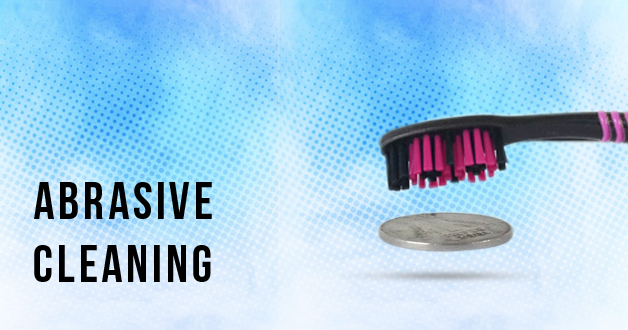 Some coin cleaners – for example, those designed to remove light tarnish – are mildly abrasive. Acid-type solutions used for ‘dipping’ are often abrasive. These ‘dips’ are controversial because they are used so often. Acid tends to leave the surface of a metal looking pitted, not scratched, as physical abrading does. A split-second dipping might not be very harmful, but immersing a coin for more than a couple of seconds could be. It is advisable not to dip any valuable coins until one has mastered the technique of dipping. Many century-old coins have been dipped. It just isn’t possible for 100-year old silver coins to be as brilliant as they were in their original mint state. Toning is a natural part of a coin’s aging process.

Each coin has many little flow lines which can be seen most clearly under a scanning electron microscope. These flow lines result from the minting process and the depth. The quality of these lines produces a coin’s gleam. If these little lines are flattened or eliminated, a coin loses luster. It’s like flattening the waves on an ocean; the ocean wouldn’t reflect light at every angle from which one has viewed it.

Abrasive cleaning removes these flow lines while mildly abrasive cleaning reduces their intensity. Dipping is cumulative; coins lose another tiny layer from each dipping. Further, some coins have no high-quality flow lines, to begin with. If these coins are dipped, their grade will be lowered substantially. Over-dipped coins are lackluster and very unattractive. The appearance of some coins can be improved by dipping, but one has to know coin surfaces very well to know which coins can be dipped and which will lose luster.

Many people often confuse hairlines with die-polishing marks, which are also patches of parallel striations. The difference is that these resulted from the polishing of the die, not of the coins. Die-polishing marks are raised, whereas hairlines are indented. 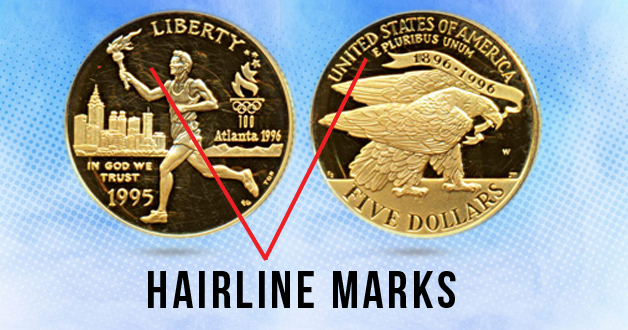 Nonabrasive coin cleaning does not adversely affect a coin’s top layer of metal and, on sense, does not ‘eat into’ the coin to achieve its effect. Submersing a coin in water, for example, is a nonabrasive cleaning method. Nonabrasive cleaning methods are used to help preserve coins, for they remove particles and other chemicals from the surface that might later negatively affect the coins. For example, if an individual accidentally sneezes on a coin, one should use a nonabrasive method of removing saliva. Saliva later tones the surface a dense, dark color. 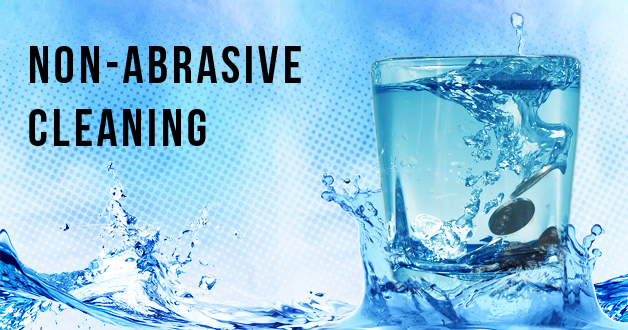 Nonabrasive cleaning methods are being recommended increasingly before long-term storage. One chemical in particular, trichlorofluroethane, was used for years as degreasing solvent and prized for not leaving a residue on the coin’s surface. This chemical is banned as it is an ozone-destructive solvent. Preservation experts recommend the use of denatured alcohol in its place.

Coins are essentially dirty. During their manufacture, their metal is rolled, punched, annealed, die-struck, and handled by various mechanical devices. Even the most well-preserved coins are beset by various contaminants: oil and grease, rag dust, bag dust, metallic particles and others.

After the coins leave the mint, they are further contaminated by counting machines and handling. When a person holds a coin, they contaminate it too. A dandruff fleck, a drop of saliva, and the oil from one’s finger have the potential to significantly lower a coin’s level of preservation. The rate of a coin’s deterioration depends a lot on the metal of which it’s made, the atmosphere, the contaminants on the coin’s surface, and the handling of the coin.

Normal pollutants found in the air can cause problems by combining with oxygen to damage a coin’s surface. Gases produced while a coin is housed in a plastic holder can also be a cause of damage. Caustic chemicals, such as compounds containing sulfur, can harm coins too.

If one decides to neutralize or solvent-clean a coin, they should be certain that the coin’s surfaces are pristine and haven’t been tampered with. The surfaces must be free from any kind of coating for the solvent cleaning to be successful. It must be stressed upon to never use anything sharp or harsh (even cotton swabs) during solvent cleaning.

How to Clean Coins Nonabrasively?

Even the most harmless products can be misused, and even good products used incorrectly might have a negative impact on some coins. The best way to test the impact of a coin-bathing solution is by applying a small amount to the coin’s edge and observing the result. Since the rim is made from the same material and dies as the rest of the coin, an individual will know not to use a certain bathing solution if it reacts negatively with the edge. However, this still is not a complete assurance that the coin product tested will not harm the coin.